'Let them lights shine in America'

Here at CHAS we have received lots enquiries from the U.S.A. regarding Chances, many of these regarding Chance lighthouse apparatus. I was hoping to uncover lots of information on this topic during my trundle through the Lighthouse Works records but I was disappointed to find that Chances did not make much of a dent in the US market. They only supplied a handful of (around 15 first- to fourth- order) lights to America whilst French manufacturers supplied hundreds. According to Toby Chance's and Peter Williams' book Lighthouses: The Race to Illuminate the World, this was because of the close relationship between US maritime authorities and the French, as a result of France's military and diplomatic support for the Colonies in the War of Independence. It was also down to Chance's inability to establish capable agents in New York and Washington. 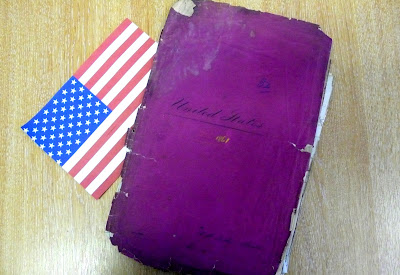 With this in mind, I excitedly stumbled upon a file and an envelope containing correspondence with Chances' agents in America. Contained in a battered and fragile paper folder, the letters provide a fascinating insight into how marketing and promotion were conducted in the nineteenth century. Most of the letters are from Chances' Boston agent R B Forbes. His letters describe attempts made to encourage the Lighthouse Board in America to purchase Chance lights between 1856 to 1861. He repeatedly admits in his letters that 'I do not think that I would make a good agent for you' and his predictions are soon realised when he has a disagreement with the Secretary, Lieutenant Jenkins, during his first attempt to present a Chance catalogue to the Lighthouse Board. During the next five years it becomes apparent that Forbes was unsuccessful at each attempt he made to introduce Chances lights. The last two letters written by Forbes were sent in September and December 1861, following the outbreak of the Civil War. He optimistically states that 'whenever peaceable relations between the North and South are resumed, Lighthouse apparatus will be wanted, as several of the lights have been destroyed & more will be no doubt'.

History has since told that this was not to be the case and in 1866 Chance were still attempting to promote their lighthouse work in America. In an additional small envelope I found correspondence between Chances, Fred Burdus of the Cosmopolitan and H Fuller, an American Naval official, regarding a Chance lighthouse advertisement in the paper. Fuller writes to Burdus charismatically, 'If your Birmingham friends want to let them Lights shine in America, they should send a copy of last Saturday's Cosmopolitan, to the Secretary of the Navy - to the members of Congress, the Naval Board, Naval Schools, Admirals, etc.'. He also claims that he can get a Bill introduced for the adoption of a Chance eclipser for a fee as 'we cannot turn the Grindstone to sharpen other men's axes for nothing'. It is unclear whether Fuller managed to turn the Grindstone but one thing is certain, not many Chance lights are shinning in America.

One light that does continue to shine in America, however, is a third order middle lens, lovingly restored by Ellen Henry, MFA, Curator at Ponce de Leon Inlet Light Station in Florida. She contacted me recently with an enquiry about the light and one of Chances' agents. She also sent me a link to a website dedicated to the Ponce Inlet Lighthouse that describes all of the wonderful work the Association is doing to preserve it and make it available to the public and she has offered me a red carpet tour of the station next time I visit Florida. If you would like to read about the light station and pay a visit yourself, take a look at the website at http://www.ponceinlet.org/

Do you remember me mentioning a film reel of the visit of King George VI and Queen Elizabeth to the glass works in 1940? What I neglected to mention was the fact that this particular reel was one amongst 66 film reels found amongst the collection. Apart from the odd title scrawled on the boxes and tin containers here and there, we had absolutely no idea what footage the reels contained. We needed an expert with the equipment and know-how to access these films so we contacted Phil Leach at MACE (Media Archive of Central England) at Leicester University. MACE is the public sector moving image archive for the East and West Midlands with a focus on moving images held on film, video, DVD or any other carrier that relate in some way to the Midlands. They provide a place of deposit for the preservation and access of moving image materials and they also provide advice on how to care for film stored at other institutions and where to locate specific films and collections.

Me and Sarah (the Borough Archivist) made a trip over to MACE a couple of weeks ago to drop these films off and Phil kindly projected some of the films for us there and then. First up was a black and white film with a soundtrack about the glass industry in Britain. After a loud blast of the orchestral soundtrack music and the clipped Queen's English commentary, it became apparent that this film may have been a professional mini-documentary that could have been screened at cinemas in the 1940s/1950s during the interval of a feature film , for example. It is unclear whether any of the filming took place at the Spon Lane or Malvern glass works but it seems very likely, given that Chances were the main producers of most glass products.

We then viewed a silent documentary/instruction style film specifically on the manufacture of Chances' laboratory glass Hysil. The tin container had a large sign 'DO NOT OPEN' and it soon became apparent why. This particular film was in quite a bad state with a few tares and at one point the projection was upside down due to an earlier careless repair. After a few tweaks and repairs from from Phil, the film was back to normal and could be projected with hardly a noticeable trace of the damage. There were many films specifically related to production at Chances including continual footage of machines operating and of female workers doing specific tasks when making and packaging laboratory glass. Whilst performing these tasks, a tiny clock was displayed at the bottom of the screen to show how long it was taking. Aside from a shy glance up at the camera and an occasional re-adjustment of their curls and Marcel waves, the ladies showed no sign of nervousness, even though their work was being scrutinised.

The main treat of the day, however, was the aforementioned footage of the King and Queen. Whilst this footage was also silent, we were all surprised to see that half of the film was done in colour. According to Phil, this kind of colour footage of royal visits is quite rare and I have to say, I was quite pleased to see Elizabeth sporting a very fetching shade of Lavender! We were happy to leave these films in the capable custody of MACE, where they will be cared for properly and can be accessed in the future. We are also looking in to having some of the films transferred on to DVDs so that we can access the footage on-site here in Smethwick. After crossing the film reels off my mammoth to-do list I had a nasty shock last week whilst cataloguing the lighthouse records. Hiding under some catalogues and brochures was a 16mm sound reel titled 'Lighthouse Story 1', pictured below. It looks like I might have to make another trip up the M69! 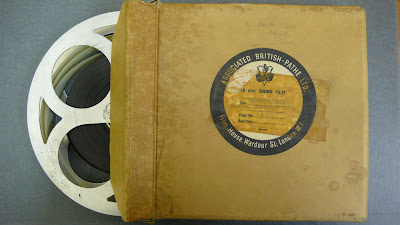 Laura Brett
I am currently working as a project archivist at Sandwell Community History and Archives Service for 12 months to catalogue the Chance Brothers Collection. This is my first position since gaining my professional archive qualification at Liverpool University's Centre for Archive Studies (LUCAS)